Back to the Main Reference page.

"The service panel brand was Zinsco. Zinsco panels are reputed to have a high rate of circuit breaker failure that can result in a fire or shock/electrocution. You should consult with a qualified electrical contractor concerning the necessity for replacing this service panel. Information about defective Zinsco panels is widely available on the internet."

The parent company “Frank Adams” continued on through the depression and kept producing that label through the 1950’s. Adams panels and breakers are now extremely rare.

Emile Zinsmeyer named his new company, the “Zinsmeyer Company”. In 1943, Emile’s son Martin bought the company from his father and renamed it “Zinsco Electric”.

Almost immediately Zinsco switched their focus to the development of new panel and circuit breaker designs. The first Zinsco panels and breakers- labeled “Magnatrip”- (patent issued in 1950) had copper bus-bars and breaker clips. By 1961 Zinsco had switched to an aluminum alloy still used today in their manufacture of panels and load-center busing.

The copper shortage of the 1960’s was primarily caused by the US government, which had huge contracts out, many of which were for air-conditioning, requiring over a million new copper coils. This action both reduced the amount of available copper for other manufacturing needs and, for the first time, created a demand for aluminum NM cable. Along with this new demand along came some unsafe new practices that resulted in code changes.

A key factor to needed change was the introduction of a new class of receptacles with the first quick-wire stabs. And these early quick-wire devices would accept both #12 and #14 wire: as minimum aluminum cable was #12 it was a fast installation.

After 1996 quick-wire devices were mandated to only accept #14, restricting the use of larger loads such as kitchens, or the standard #12 aluminum. And, by the mid 1970’s aluminum (NM) cable was no longer manufactured. But from 1964 to 1972 aluminum wire and quick-wire receptacles were being speed-wired into over two million homes, particularly tract homes. This was the formula for disaster.

The real problem was the wire itself. Prior to 1972 the wire was inferior. It had tremendous expansion/contraction differences under load and at rest. The receptacles were not constructed of aluminum, and the reaction between dissimilar metals caused the aluminum to oxidize. Oxidization of aluminum creates aluminum oxide, which is an insulator, not a conductor. Aluminum oxide-insulated electrical connections got hot, which in turn caused many fires, outlet burn-outs, and according to the NFPA, nearly 100 deaths, and this resulted in aluminum wiring acquiring a very bad reputation.

By around 1972 improvements in aluminum alloys had reduced expansion and contraction and increased tensile strength, and this combination resulted in safer, longer-lasting connections.

Around 1963 Zinsco introduced the R-38 twin breaker. This was the only twin circuit breaker that made contact on both bus-bars, supplying 240 volts in a single breaker space. This made the Zinsco brand hugely popular with contractors and millions of Zinsco service panels and load-centers were installed through the 60’s and 70’s.

With multiple breaker manufacturers in competition, and the increase in the typical number of circuits, many employed the “split-bus” panel to save cost. The split-bus developed from the six hand movement rule, or article 230 of the NEC. Typically, the first five places on a split-bus panel would have the major 240-volt feeds, such as oven, cooktop, water-heater; and a sixth 2-pole 50-amp breaker fed a separate bus in the same panel. This configuration meant that an expensive main breaker was no longer necessary. Most modern service panels have a single main disconnect.

In 1973 Martin Zinsmeyer sold his “Zinsco Electric” Co. to GTE Sylvania. During that ownership, the product line remained the same, with new labeling and branding.

In 1978 the line changed names again, and was re-labeled Challenger.

By 1981 GTE Sylvania began selling off its product lines and manufacturing facilities. The Challenger line, mostly manufactured at the time in Jackson, Mississippi was sold to a former officer of GTE, who used the Challenger name as the name of his new company, Challenger Electrical Equipment Corp.

The new Challenger Brand immediately ceased production of any new Zinsco frame panels and load-centers, but still produced the re-branded Zinsco circuit breaker line. Challenger concentrated on a new line of panel equipment using the same bus configuration proven with Murray, Crouse-Hinds, and others. But, from 1982 until 1994, the 200-amp service panels used a Zinsco frame main breaker.

Challenger flourished through the 80’s, and was eventually sold to Westinghouse in a multi asset deal, in order for Westinghouse to sell its remaining electrical manufacturing facilities to “Eaton Corporation” in 1994. Somewhere in this deal was the fact that both Challenger and T&B had manufacturing facilities in Mississippi and Thomas & Betts (T&B) received the Zinsco circuit breaker molds.

Zinsco electrical equipment is considered obsolete, due to a design flaw in which the circuit breaker's connection to the bus bar becomes loose, with the potential to cause arcing and overheating.  Long-term exposure to overheating can cause the breaker to fuse to the bus bar, making it impossible to remove. Worse, it can cause the breaker's contacts to fuse together, preventing the breaker from tripping in an overcurrent situation and creating a potential fire hazard.

Aftermarket replacements for the Zinsco breakers are available; however, it may be more cost effective simply to replace the entire panel with a more modern and safer design from another manufacturer.

These breakers are most easily recognized by the colored breaker handles. 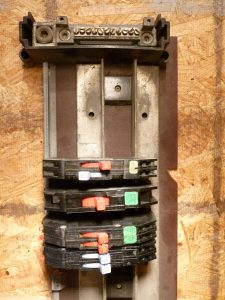