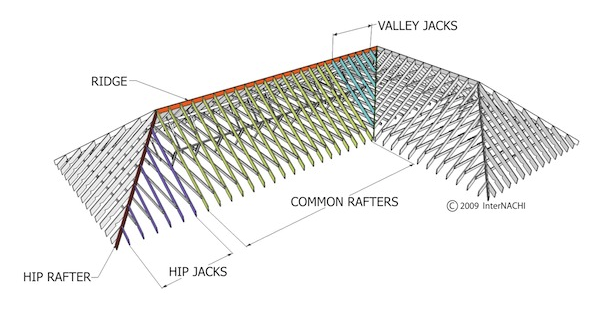 Watch for the following in conventionally framed roofs:

Metal Connectors and their Fasteners:

Ridge boards are an advantage with modern OSB or plywood panel sheathing but are less important on older roofs with wood board sheathing.

On roofs with modern panel sheathing, the sheathing on a single slope acts to a great extent as a single diaphragm. Backing for perimeter nailing is provided by sub-fascia at the eaves, by common, hip, or valley rafters at the gables, hips, or valleys, and at the peak, backing is provided by the ridge board.

On older roofs with wood boards used as sheathing, the sheathing acts less as a diaphragm, and so perimeter nailing is less important. On these houses, the ridge is often 1x6 and its main purpose is to provide backing for nailing rafters, especially if rafters on opposite sides of the ridge to not exactly oppose.

Why Rafters Pairs Should Oppose

Opposing rafters form pairs that need to have their bottoms tied together in order to form a simple triangular truss. To be structurally efficient and allow rafter ties to effectively connect their bases, rafters need to oppose each other as directly as possible. 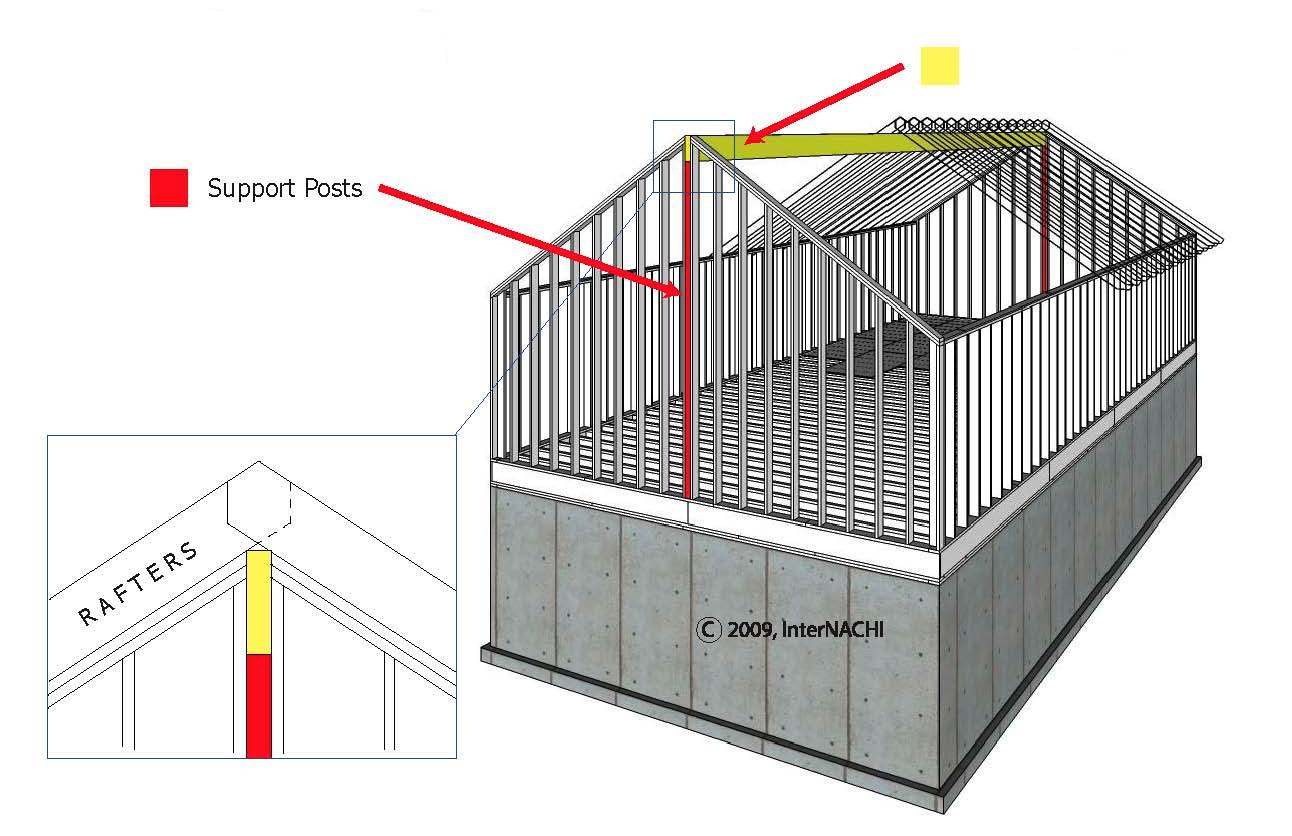 In homes with cathedral/vaulted ceilings that have no rafter ties, the ridge must be strong enough to support the roof load without sagging. A structural ridge is used for this purpose. Structural ridges are typically wood or steel beams. Solid wood beams may be used, they may consist of  layers of engineered lumber bolted (LVL or “MicroLam”)or glued (GluLam) together to form a beam.  Structural ridges are typically supported at each end by posts. When roofs have long spans, intermediate posts may also be used. 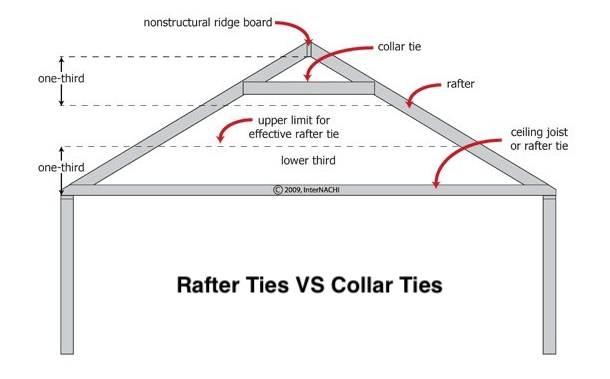 COLLAR TIES are not required in all roofs, only roofs for which they have been specified by an architect or structural engineer. Roofs with no collar ties installed are not deficient. Where they are required, they are usually 1x6 or 2x4, typically installed every other rafter pair (4'oc), in the upper third of the roof. 5 nails per side.

RAFTER TIES are required on all conventionally framed roofs unless a structural ridge is installed. They should be installed as low as possible in the roof. Min. per side: 5 face nails into the rafter and 1 toenail into the top plate (when possible). 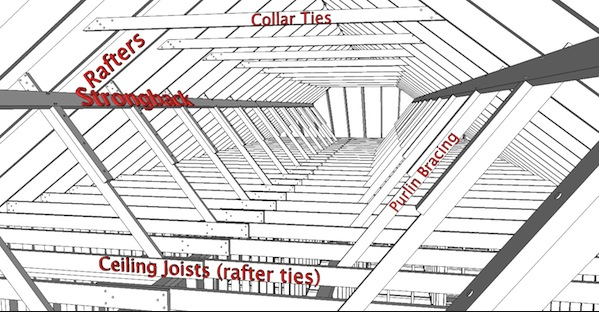 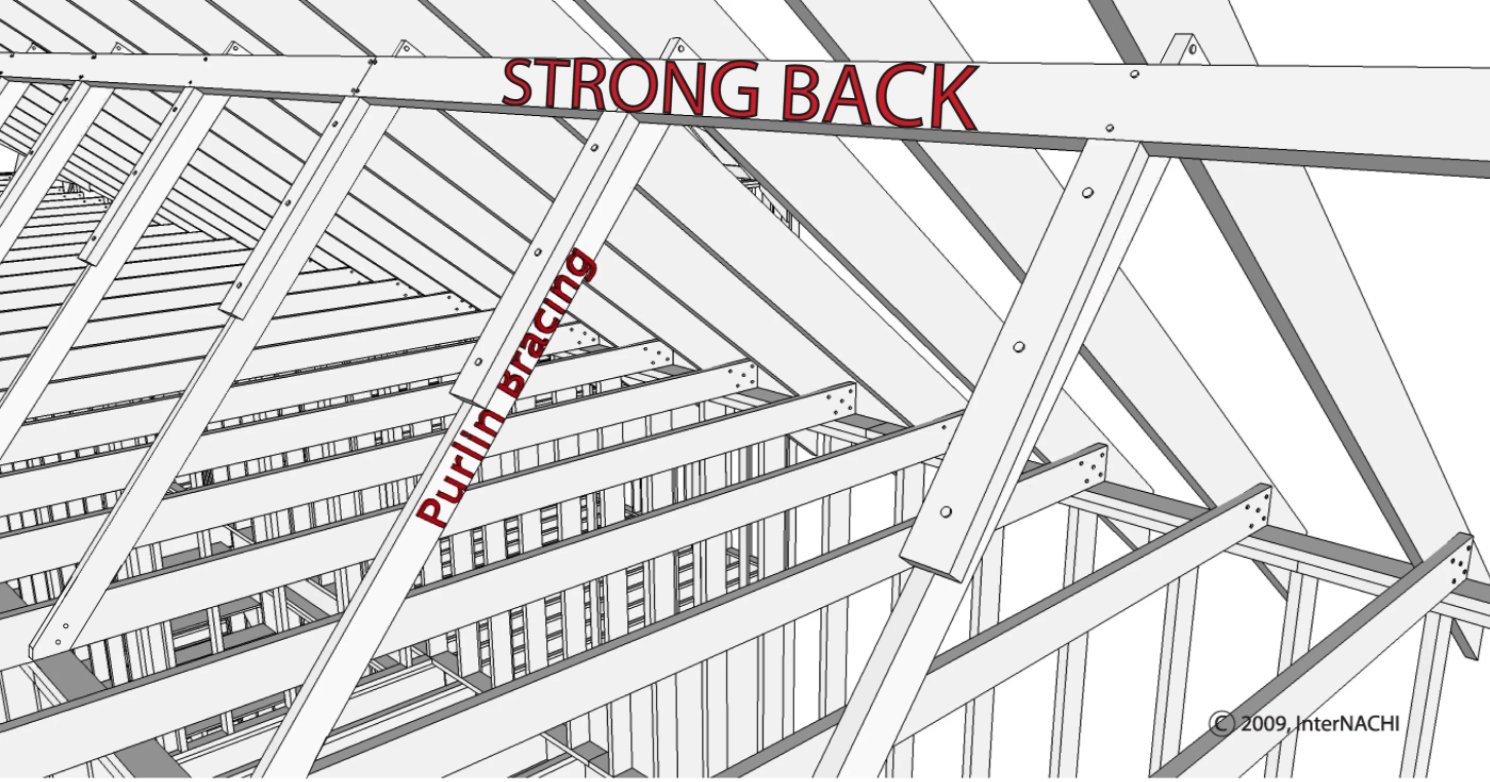 Where rafters are overspanned and likely to sag, the span can be reduced by installing a purlin system. Purlin systems are part of the load path that transfers the roof load to the underlying structural elements.

A purlin system consists of a strongback that rests against the undersides of the rafters. Modern building codes require strongbacks to be at least the same dimension as the rafters, but this is a relatively recent requirement. Many, many purlin systems have been installed with strongbacks that don't comply with this provision with no problems resulting at all. If you feel compelled to mention it at all you should mention in your narrative whether you see signs of failure due to failure to comply with this provision.

Strongbacks are supported by braces that should angle no more than 45 degrees and that should rest on top of bearing walls. Nailing patterns are:

Occasionally, when no bearing wall is handy, braces will bear on ceiling joists. Look for bowing of ceiling joists and when you see it, mention that this condition is improper and will worsen over time if not corrected. To alleviate this condition, a structural strongback assembly is sometimes installed across the tops of the joists to prevent sagging.

This condition is most commonly seen where a garage roof intersects the slope of a house roof. To simplify the framing intersection, an overframe is typically installed. 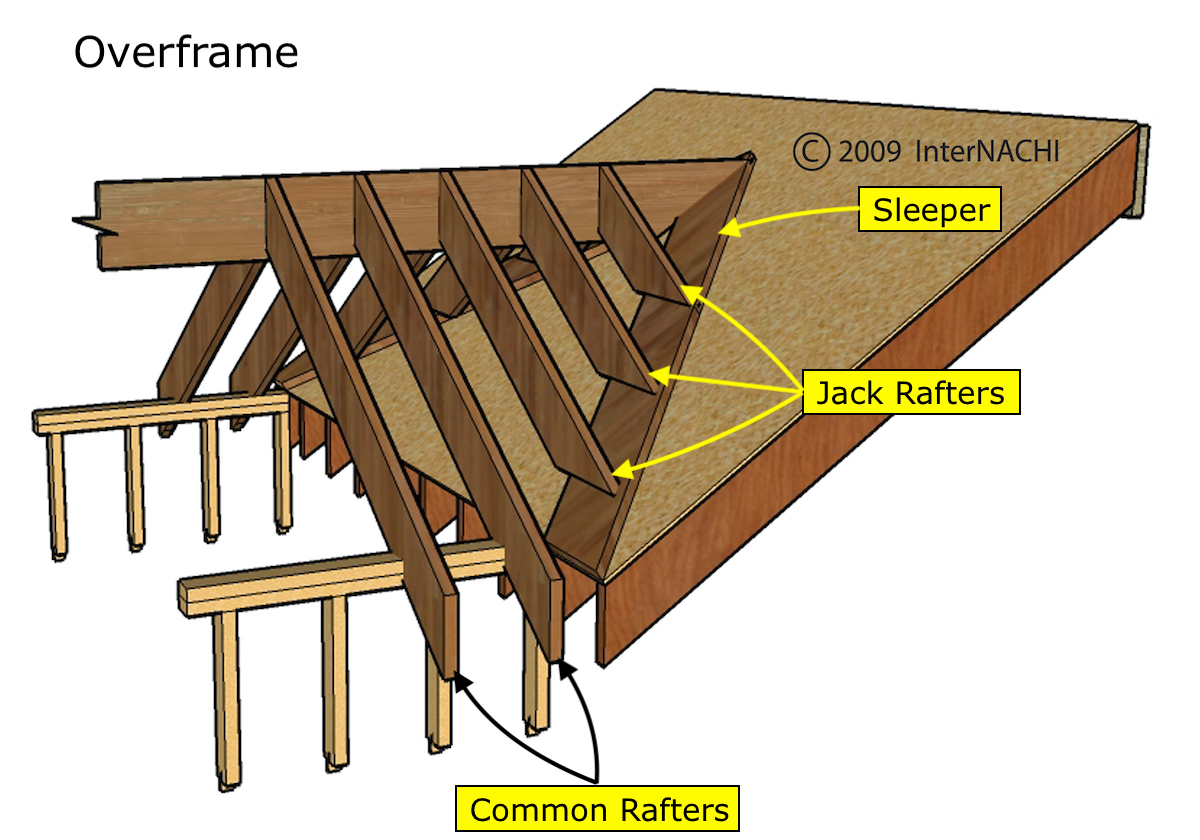 The overframe ridge should align with the rest of the garage roof, appearing as a straight line for the entire length of the ridge.