Interpreting what you See 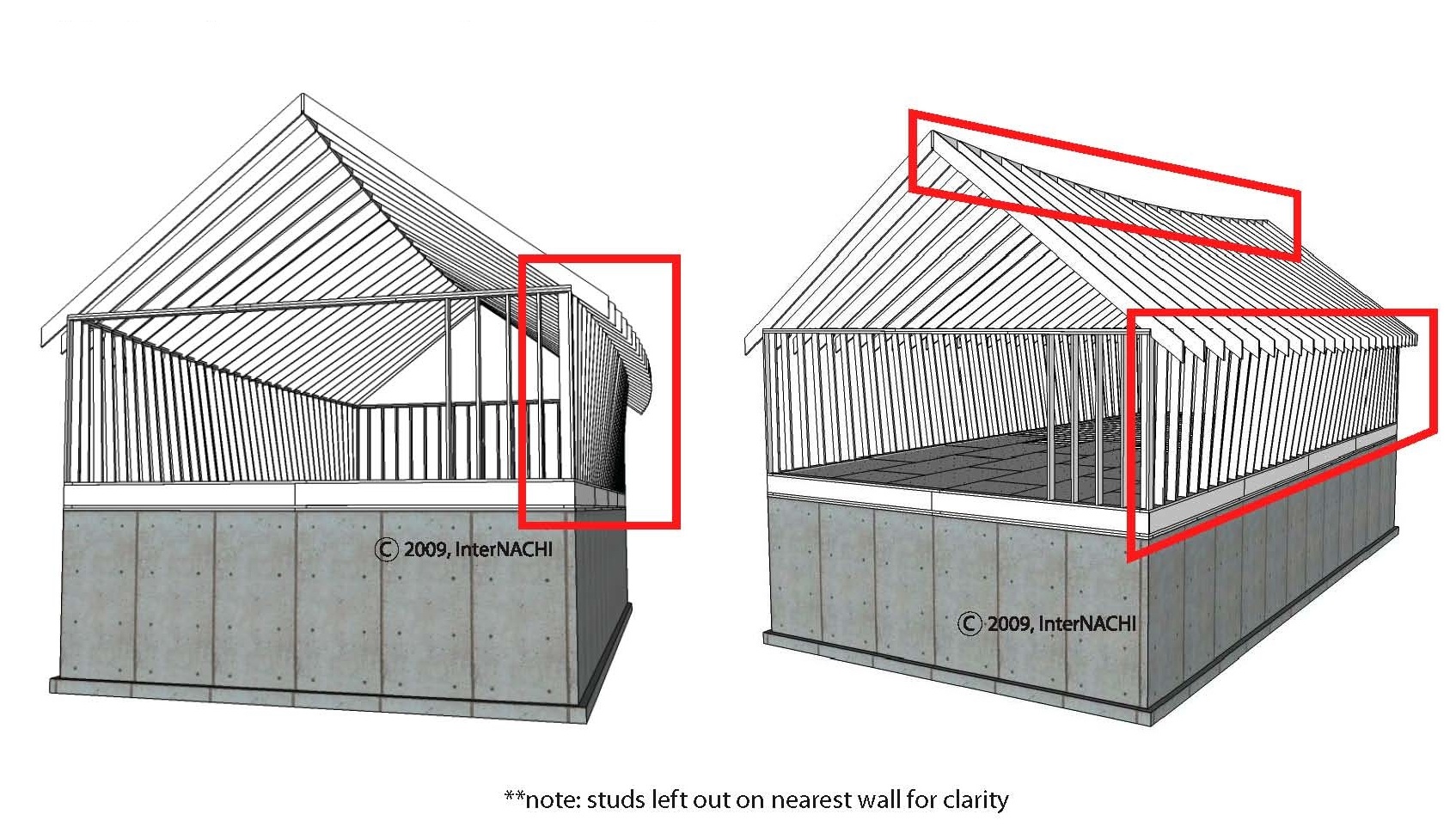 Sagging ridges are typically in indication that rafter ties, installed to connect the bottoms of opposing rafter pairs, are over-spanned (placed too far apart), have been spliced and splices have failed, or that they are inadequate for some other reason. Recommendations are typically for stabilization, since correction may result in cracking of wall or ceiling covering materials.

Sagging Rafters are relatively common in homes built prior to the 1960s when rafters were typically 2x4 or 2x6, and over-spanned either in spacing or in length.
The recommendation is typically for installation of a purlin system in which a horizontal strongback is supported by braces bearing on the tops of interior walls.

Its not uncommon for inspectors to encounter crude attempts to support rafters, often with braces that bear on ceiling joists, causing ceilings to sag. Sagging of both rafters and ceiling joists will continue unless this condition is corrected. Continued sagging also increases the chances of eventual structural failure of the roof.
Do not walk on roofs with sagging rafters!

Sagging of overhangs at the rakes is typically the result of inadequate framing of outlookers.  Correction methods vary with conditions. Recommend that an evaluation and any necessary work be performed by a qualified contractor.

Localized Depressions in the Roof:

Localized depressions in the roof may indicate broken or improperly installed roof framing.  They may also indicate an area in which a skylight has been removed and the subsequent framing infill was inadequate.  Remember to check any such areas once youre in the attic. Do not step in these areas.

Humps in the Roof:

Humps in the roof may be caused by roof structure framing problems, or by problems connected with the installation of the underlayment or roof-covering materials. Again, check any such areas once you're in the attic.

Soft, or very springy areas in the roof can have a variety of causes:
3/8 plywood sheathing: In many areas, this was acceptable in the past and may still be acceptable in some areas. Its not ideal, but its not a defect as long as it complied with the local building code in effect at the time the home was built.
Decay: long-term leakage can encourage decay that may not be obvious from the home exterior.  Avoid stepping in any such areas!
Damaged framing: Deflection may involve more than just the sheathing. Again, you should remember to look once you enter the attic.

Many inspectors start the inspection at the home exterior. In older homes, inspector should consider inspecting the attic before the roof in order to ensure that the roof structure is sufficiently sound the bear the inspector's weight.