Craze cracking in asphalt shingles is random surface layer cracking. It's caused by forces similar to those that create shrinkage cracks in concrete (and mud); resistance to shrinkage.

Asphalt used in the manufacture of shingles has compounds that are designed to keep shingles waterproof and flexible. These compounds evaporate slowly over shingle long-term service life. They're called volatile compounds.

Another ingredient used in asphalt shingles is filler made from powdered stone. Asphalt shingles may have up to 65% of their asphalt replaced with this filler material. When excessive amounts of filler are used, shingles lose volatile compounds more quickly from their weather surface. This loss of volatiles results in shrinkage of the surface layer at a rate faster than that of the underlying asphalt in the main body of the shingle.  This difference in rates of shrinking creates tension in the surface layer that is relieved by cracking.

You may see it as soon as 6 years after installation. It's made worse by poor roof structure ventilation, which means a hotter roof, which means that volatile compounds evaporate at a faster rate.

Craze-cracking- which is NOT considered functional damage by either shingle manufacturers or insurance companies- seldom turns into splitting- which is considered functional damage. Craze-cracking seldom causes leaks, because cracks are in the surface layer only. In addition, underneath each craze-cracked shingle is another shingle, usually in much better shape since it hasn't been exposed to weather.

Do not call it a manufacturing defect! 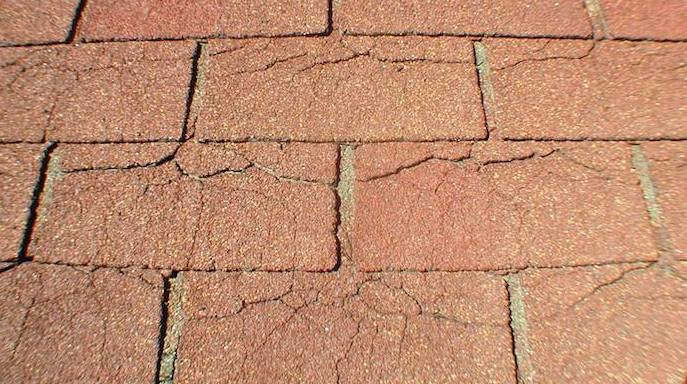 Eventually, cracks propagate through the mat to form splits. The roof is then at or near the end of its useful life.